this is for cripple doodle

so on tuesday there was my last reading before i move. my friend katie took some video and emailed said videos to me and i am going to put them up right now along with a few notes my friends took and this will tide everyone over until i move back in with my parent on tuesday while i look for a place in new york and then when i am back in with my parents i can upload the video they shot of that reading a month ago or something with ca conrad and ryan eckes.

a bunch of my friends came to the reading and everybody got drunk. at one point in a poem there was this part


*
Your stories are getting sadder and sadder every day she told me. I don’t believe you I told her. I got thirsty. I thought if I put my hand through the door that it would come out in or around or near the fridge. What are you doing she said. I kept moving my hand. She said Are you trying to get a beer? She went inside. There was a beer in my hand. There are lots of things not worth questioning.

and when that happened someone put a beer in my hand and that was great.
by someone i mean josh. who is a doctor. and awesome.

but so right a bunch of my friends came to the reading and a bunch of those friends that came got real drunk and two of them had been doing so for 8 hours prior to the reading, and but while they were there they made two lists which i am now going to show to you 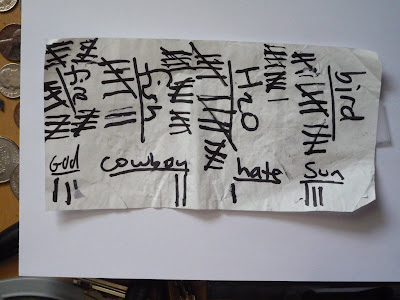 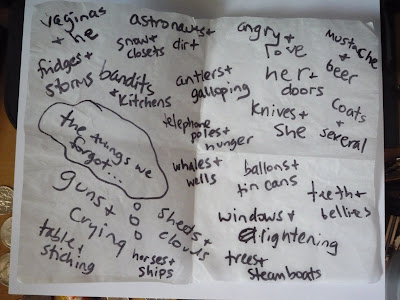 i read a lot. at one point i kept getting text messages from john about how i needed to interact with the audience more. i was drunk. my leg kept vibrating. it wouldn't stop. so i read that note and then i interacted more. probably in the third video. i don't know. this is all i have got right now. i haven't really packed.
also, side note, was definitely kind of drunk by the second video
also, i just got a recording of the reading, and apparently i went on for like 43 minutes. what the fuck. lordy.