so we're finishing up the cover. i made all the final edits. about four times. which doesn't include the giant revisions that happened between j.a. sending me his notes and the first final edits. at least 6-8 pages were cut, around the same added, and whole pages rewritten for syntax and clarity and that whole punching you in the heart thing that my girlfriend talks about a lot.

anyway. i thought i would write a post about the book, about how it came about, and maybe soon make a post on these long poems i'm trying to write. i am trying to write long poems. i am using lines sometimes instead of sentences. it is fucking weird.

so this goes back.

in june 2008 [we'll say by june 3rd or 4th] i started a series of poems that was going to become the book everything here is ok [excerpts of which you can find online all over the place. most of my publications are from that.]

basically i'd been writing poems all the time pretty much every day since i started this blog in 2007, and the whole time i did that i'd been sending chapbooks to bear parade without ever really stopping and thinking about what a chapbook was or could be. gene morgan was and is a great guy and at one point told me it wasn't likely he was going to publish me right now, but that i had a couple of really good poems, and then gave me a bunch of places he thought i should send to, which included pineapple war, who has since published a couple of pieces by me, and which is run by prathna lor, who has since become a pretty great friend and is in fact an incredible writer.

anyway, i decided when i moved to south philly that i would sit down and write ten-twelve poems that worked together and created a sort of concise whole. i came to this conclusion after reading jesus' son. i figured out how i'd try to approach changing my writing to let it grow into what it is now after reading cognitive behavioral therapy. so i sat down and wrote what became the second section of everything here is ok, it is gonna rain [an earlier version of which was published by ixnay press in volume four of the ixnay reader, which is linked at the bottom of the page, so just scroll down or something].

anyway gene almost took it but he didn't. which was fine because for the first time ever i felt like i was actually really doing something with this. like i had a purpose. and so, over a period of time that is well documented on this blog, i wrote a book of linked prose poems.

after i finished this book i wrote this thing that was a finalist for the lamination colony this is not a contest contest. i didn't pay attention and things were unclear so i sent the piece to j.a. for a mud luscious chap because for some reason i thought it wasn't being published. it was. so i wrote another one for j.a., and that was the piece in alice blue. around this time i sent j.a. everything here is ok. we'd been talking about where we were sending books and i mentioned this one and he asked to see it, so i sent it over.

while he was reading it, i got invited to participate in the dollar store tour. so i wrote the piece that's in noo journal.

soon after this, j.a. got back to me, saying
sf.

thanks for sharing this EVERYTHING HERE IS OK ms with me. much appreciated. I really enjoyed the sort of callous and vehement style of reporting in these fictions / poems, the way they are approached almost journalistically, as if to provide information rather than to contextualize in imagery / design. some really grabbing things in this. it is not a good fit with what I am looking for in terms of future mlp novel(la)s, though I cannot even remember if we had discussed that possibility, but I would love to see how the style used here would apply to an overall narrative, a ms structured as a true novel(la) rather than as a prose / poetry collection with the section breaks and subtitling. what are you working on next? if it is something along those lines, this flash organization applied to an overarching narrative, I would love to take a look at it for future ml press consideration. we are still hoping to get a few more mlp subscriptions to really push the novel(la) series into concrete existence, but we are going to read ahead regardless. best, and thanks again for the chance to see this one.

so i had just quit my job at whole foods and moved back into my parents' house in allentown pennsylvania. in the middle of july i took all three of the above mentioned pieces and put them one after another in the order they were written. i then sat down and wrote them together. once they made sense, i went from there.

i sent the ninth draft to j.a. on august 14 and on august 23 he accepted it. it was, i think, my second day in brooklyn.

there are lots of things without which i would not have been able to do this. aside from quitting the job. ken baumann helped me get through writing the lamination colony piece and shane jones gave me some good advice on the ending.
as i wrote the early pieces i was reading this long ron padgett poem called i think MY METHOD from his book HOW TO BE PERFECT. i was also rereading all of shane jones's numbered stories.
when i was working on the novella i was reading deb olin unferth's VACATION and frank stanford's THE BATTLEFIELD WHERE THE MOON SAYS I LOVE YOU.
deb's book made me really and truly believe that it was possible to write a longer piece. her book is just one perfect sentence after another, forever. it was seemingly written that way, one perfect sentence at a time, and the idea that all you had to do was just put one good thing after another until you couldn't anymore was somehow a thing i could not have figured out on my own.
as for stanford, he got the epigraph.

there were shit tons of revisions. an entire subplot involving a bizarre telephone interview that loosely expanded upon several portions of the book was cut entirely. it may yet see the light of day. news on that soon.

the first page was rewritten easily eight or twelve times during the course of three final layout edits. the fourth i blindly approved as even after reading it i couldn't tell what was happening anymore. reading the whole thing that many times got a little numbing. but we got through it. and i feel great about it.

in closing here is a photo from a shoot that may or may not lead to the cover. 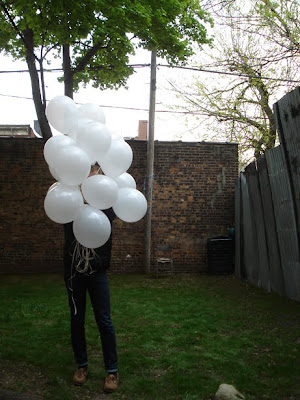 Labels: book stuff, everything here is ok, j.a. tyler, novella, total transparency, when all our days are numbered

I'm really looking forward to this

I'm glad all the hard work is coming together. It's going to be awesome. Also, you and photo shoots with balloons are wonderful.